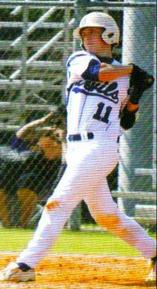 Scouting Report
Ben Herring is a 5-10 170 lb catching prospect from Columbia, SC. He runs well for a catcher, so he won't clog up the base paths at the next level. Defensively receives the ball well and understands the catching position enough to call his own game behind the dish. A solid 1.9 pop time as a sophomore in high school.  At the plate Herring has doubles power that should develop further as he continues to mature physically. Hit over .300 in the most competitive AAA region is SC as a sophomore, including a homerun. Very intelligent baseball player and one of the players that is a pleasure to coach. Has shown ability to pitch effectively with low 80's velocity, as well as playing third base. Carries himself well and is a very high character individual. Great student in the classroom and on the field. Herring is a definite follow and class of 2014 prospect at the catching position.
Carolina Combat Baseball