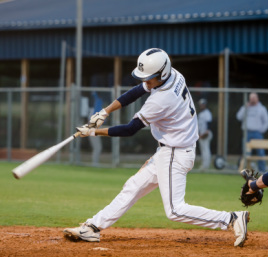 Scouting Report
Charles "Chaz" Mizzell is a 2013 OF/2B prospect out of 4A power Blythewood High in SC. Mizzell runs well and projects at a corner OF position but can handle playing CF due to his tracking ability, great potential at 2B as well. Arm strength is above average and gets good jumps on the ball off the bat. At the plate Mizzell has shown the ability to square up and drive the ball gap to gap off quality pitching with wood. Good bat speed and makes solid contact, doubles and triples power which should further develop as he progresses. Advanced level hitting approach, was a mainstay batting 2nd and 3rd in the summer of 2012. Most importantly, Mizzell is a high quality student with great character. Mizzell is a definite prospect and should be a steal in the class of 2013 with tremendous upside.
Carolina Combat Baseball