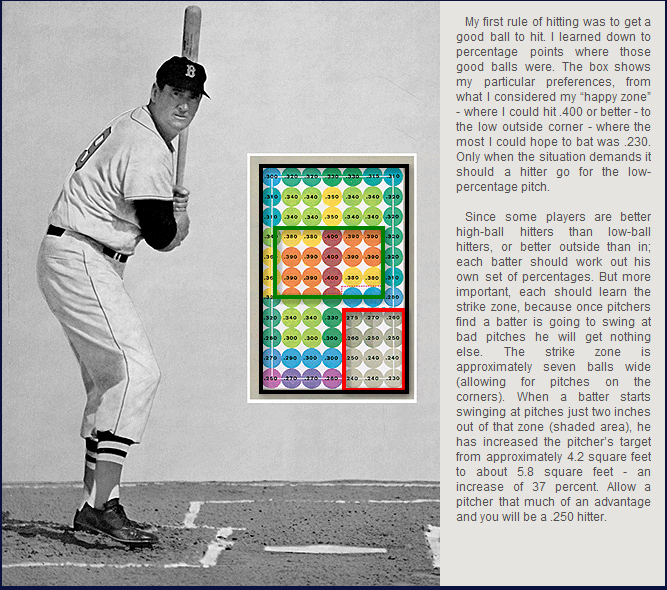 Ted Williams, a first ballot Hall of Fame hitter, was the last person to hit over .400 in a full major league season. He studied pitchers, and more importantly, he studied great hitters.

We can't be Ted Williams, but with his help and advice, you may reveal your personal best at the plate.

We can take the following information and use it immediately to bring our game up a grade. Here's what to expect,

In this power packed report, we'll be drawing from The Science of Hitting AND My Turn At Bat, both masterpieces co-authored by Ted Williams and John Underwood. A snippet of what we'll be diving into about the Physical part of the swing, according to "the greatest hitter to have ever lived":

Here's the best part, the mental side of "The Kid":

This is a man who dealt with many hardships testing his mental toughness everyday: the Boston media tore him apart with zero gratitude for his achievements, he had an anti-social personality type (not good in Boston), he lost 5 years to fighter piloting with the US Marine Corps in World War II and Korea, and he suffered a broken elbow during the 1950 All Star game, he says, making him a different less potent hitter.

Ted Williams is a testament to "the most cerebral hitter to ever walk the planet," yet his swing was most compared to twisting himself around like a Barber Pole...so, let's get started...

1. Don't swing at pitches NOT in the strike zone...for every ball we "go fishing" for the pitcher betters his chances to get you out. Our walk to strikeout ration should be 2:1, in other words, we should be walking twice as many times as we're striking out, and that means we have to be patient and get a good ball to hit.

2. We'll go into this in more depth while discussing the mental part of the game according to Ted Williams, but we have to use the information collected with each pitcher and anticipate his next move. It's not difficult, it takes common sense and a little faith on the hitter's part.

3. Being short to the ball is critical to being consistent with our power. The more compact we are, the less wasted motion, the farther up the food chain we become...simple as that. Look at all the great hitters in the Big Leagues today, Albert Pujols, Chase Utley, Derek Jeter, they all are short and quick to the ball. They're as consistent as they come.

Keeping Our Sanity with a Healthy Outlet
Ted Williams had a fondness for fly fishing, this I think, was vital to his mental well being as one of the greatest hitters who ever lived. At any level of play we need to develop a break away from the action, a mental vacation if you will. Some players play in a band, go fishing, play another sport, work in their charity foundations, and on and on. We can't hit all year long, take a break sometime to recharge your batteries.

Muscles grow, NOT when we're lifting, but when we're resting. The same goes for our brains. I'm tired of seeing 12-year-olds pushed into more games a year than a Major Leaguer, this is getting out of control.

What kind of Dedication does it take to be the Best?
When Ted Williams was a kid he used to get 100 at-bats/day on the sandlot fields with other above average ball players. Most Little Leagues have 1-3 games per week and a player might get 4 at-bats. Sure, Little League is great, but in order to be the best, we have to get tons of real at-bats early on.

Let me put it another way...the faster we learn "our style" as a hitter about our swing, the faster we can work the mental side of the game to get ahead.

Rogers Hornsby (one player Ted Williams held to super high esteem) said to him at one point in his career,

"A great hitter isn't born, he's made out of practice, fault correction, and confidence."

What good news to those who weren't born with trophy genes.

1. We have to concede on power a bit and NOT swing from our heels with two strikes because the pitcher is at an advantage unless the count is 3-2. Sabermetrics shows batting averages go way down in 0-1, 0-2, 1-2, and 2-2 counts. These are the counts hitters are most likely going to see purposely thrown balls out of the zone and the pitcher's best pitch, so shorten up and play a little pepper...we have to swallow our pride every once in awhile.

3. Again, this goes along with one of the three Ted Williams Golden Rules for hitting, the shorter and more compact we are with our swing, the more time we can take to get a good read on the pitch, and the more pop we can muster on the baseball.


Evidence of the "Through" Swing in The Splendid Splinter's own words...
"The baseball swing is a hard push-swing. You are pushing right through the impact area, about six to eight inches on plane with the flight of the ball." The Science of Hitting, Page 58

And then he goes onto say, where swing power comes from,

"You get your power not so much from the wrists or the arms and shoulders, but from the rotation of the hips into the ball." Same page and reference as above.

This is what Jaime Cevallos's MP30 baseball hitting aid helps a hitter to do.

Like Ted Williams says, the wrists roll over 6-8 inches after contact, if not more. So, we should be top hand palm up, bottom hand palm down through the contact point. The thought of a "wrist snap" is extremely overrated.

What's So Critical About Our Hitting Style
Don't change it.

Another great piece of advice, according to Ted Williams, he received from an esteemed colleague was to never let anyone change his hitting style. Now, don't confuse swing style with technique because they're different. A hitter's style is his pre-swing locomotion and the way he looks prior to the pitch.

A hitter's technique is the approach to the incoming pitch, which is the same with every hitter. All great hitters follow the same mechanical principals from the weight shift and load to the follow through.

When we impersonate our favorite Major Leaguer hitting...that's his style.

Teddy's thoughts on "Guessing"
Guessing, or anticipating, is about being more observant. Most hitters are scared to death of guessing pitches, and most coaches will urge you not to. The reason is simple, "what if I guess wrong and look horrible?"

I didn't get this concept until my Senior year at Fresno State, and once I got the hang of it, the better my offensive numbers got. If I had the knowledge early on and was able to develop the skill, then God only knows where I'd be. This is what separates exceptional Major Leaguers from "the rest." Here's the plate discipline plan to success article we did on Swing Smarter I learned my last year at State (Sorry, this is unavailable now, unless you sign up for The Dugout Newsletter).

Which brings me to another point, TW says proper thinking is 50% of hitting (remember Ted's 3 Golden Rules?).

Most of the best hitters in the Big Leagues "anticipate" pitches, they look for certain pitches in certain locations based on information given to them in scouting reports and theirown history with a particular pitcher.

If a pitcher throws fastballs and curve-balls but can't get his curve-ball over the plate, then we'd be silly to look for the curve-ball...you see, the pitcher eliminated the pitch for you, so now you can sit 100% dead red. It's about reducing risk, so we're less likely to anticipate wrong.

However, anticipating wrong, tells us something about the pitcher, so next time we have more information to use on next time up.

Always know which pitch the pitcher got us out on and what location, especially on a swing-and-miss or weak contact. The pitcher will most likely come back with it in later AB's. Ted Williams used to get ticked when a guy would get out, and after asking him what pitch he got out on, the hitter responded, "I dunno."

If there are runners on base, then that will often times dictate which pitch a pitcher will choose to throw...and also who's on deck. If Babe Ruth was hitting behind Albert Pujols, then I guarantee Pujols would get way more good pitches to hit than he does now.

Here's how you eliminate that option...

As a hitter, plate discipline is the golden ticket to getting good pitches and to make "guessing" look and feel more like "educated anticipation." If we have a good feel for the strike zone, we give the pitcher less to work with, and a better chance to get our pitch to hit. Again, Pujols is a machine when it comes to plate discipline, he rarely ever swings at a bad pitch.

Without plate discipline, as a hitter, it's going to be a constant uphill battle. The better we are at knowing the strike zone, the more meatballs we'll get to hit.

The Science of Hitting is available at most book stores and online, it has been studied by countless Hall of Famers and is a must own if you want to have anything to do with hitting...

Stay tuned to the email address you entered for more valuable information you can use to help your game out immediately, whether coaching or playing!