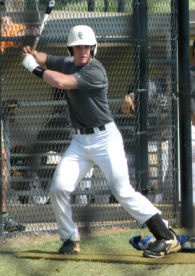 Scouting Report
Ryan Lark is a 2014 prospect at the catcher position. Solid frame, athletically strong player. As a catcher he turns in a 7.28 60yd dash time, he can get out of the box and leg out doubles and triples. Lark receives the ball well and catch and release is a plus with a 1.81 pop time. Stock will only improve going in to junior season. As a sophomore batted over .300 in a tough AAAA region. Hit over .500 in summer showcase ball. Ball jumps off the bat with backspin and carry, definite middle of the order type hitter. Displayed homerun power in high school and summer ball in 2012. Abilities allowed him to play above his age in summer baseball. Lark is without a doubt a prospect for 2014 at the catching position. Even more than his solid wheels, great defense, and big bat...Lark maintains a 3.5 GPA, so he is also a quality student. Great character as well as abilities.